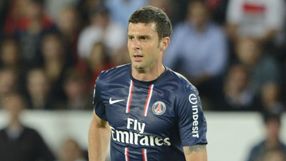 PSG wasted numerous goal chances after having Thiago Motta sent off on the stroke of halftime for a dangerous tackle on Frederic Sammaritano.

Carlo Ancelotti's men were also hindered when captain Thiago Silva had to go off with a leg injury.

Brazil forward Lucas Moura made a quiet league debut for PSG who have 39 points from 20 games.

Ajaccio, who are sixth from bottom, frustrated PSG in the first half and the home team found it tough to create clear-cut openings.

Zlatan Ibrahimovic, the league's top scorer with 18 goals, wasted their best opportunity when he volleyed a fine pass from Motta over the crossbar in the 32nd minute.

Ajaccio goalkeeper Guillermo Ochoa then saved a powerful header from Brazil defender Alex in the 61st minute before denying Ibrahimovic in a one-to-one.

Sweden striker Ibrahimovic could have won it for PSG in stoppage time but his shot from just outside the box went narrowly wide.

Earlier, Yohan Mollo scored one and set up another goal in his first league game for Saint-Etienne since joining from bottom club Nancy as they were held to a 2-2 draw by visiting Toulouse.

Saint-Etienne, who had not scored for five league games, went in front in the 26th minute when captain Loic Perrin headed in a Mollo free-kick.

Etienne Didot levelled a minute later before full-back Serge Aurier struck from just outside the box to put Toulouse, who are 11th, ahead two minutes before half-time.

Tenth-placed Saint-Etienne were rewarded for their second-half efforts when Pierre-Emerick Aubameyang's effort was parried into Mollo's path and he tapped the ball into an empty net.