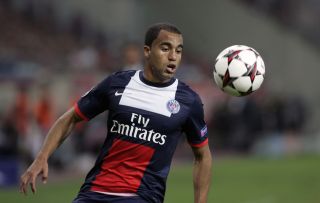 The Brazilian signed for the Ligue 1 champions in January after they beat off competition from Manchester United and Chelsea for his signature.

He started just nine league matches last season and although he has been involved in eight of their nine domestic fixtures this term, he has only started four.

His lack of first-team football has seen him drop down the pecking order for Brazil and he has only started one match for the national team this year.

The 21-year-old admitted to Brazilian newspaper Globo Esporte that he had struggled to adapt to life in Europe but insisted that he was enjoying his football.

"I haven't been able to show everything I can do," he said. "I haven't completely adapted to French football, but I am not bad.

"I'm feeling well there and I like everything there.

"It's step by step, my father has always said that. Little by little.

"I have to build my path. I will not lose heart. I will keep my head up."

Lucas made his first start for Brazil in their recent friendly international with Zambia in Beijing, playing the first half of their 2-0 win.