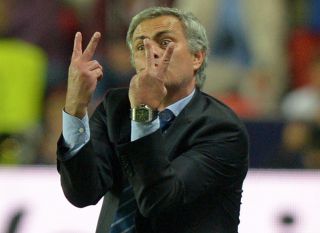 The pair renewed their hostilities after Guardiola's year-long absence from football and Mourinho's return to Chelsea from Real Madrid, as the 10-man Londoners went down to the Spaniard's Bayern Munich 5-4 on penalties after a 2-2 draw in Prague.

Chelsea substitute Romelu Lukaku missed the decisive spot-kick in Prague but Mourinho, who managed just three wins with Real Madrid in 15 fixtures against Guardiola's Barcelona, was in a prickly mood after yet another defeat in the ongoing rivalry.

Ramires' 85th-minute dismissal ultimately cost Chelsea but it did not stop a frustrated Mourinho lavishing praise on his side.

"The best team played with 10 men for a long, long period in the game," the Portuguese manager said.

"They played against the champions of Europe and they were the best team.

"We only have reasons to be proud, to believe in the future. But I prefer just to say the best team lost and stay with it."

Mourinho then questioned referee Jonas Eriksson's decision to send off Ramires for a foul on Mario Gotze as well as the Swede's love for the game.

"I'd prefer to say no, even if you say yes," Mourinho said.

"Rules are rules but there is a very important rule which is common sense, which is the passion for the game.

"When a referee takes this decision, I'm not sure he's in love with football."

"He's worked fantastically since the first day, so I hope he gets confidence in matches like this one," Mourinho said.

"He had a very good match."