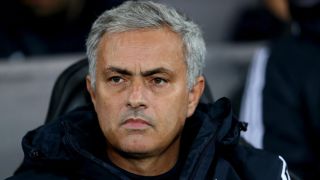 Manchester United manager Jose Mourinho praised his side for their improved attitude in Tuesday's comfortable 2-0 win over Swansea City in the EFL Cup.

Jesse Lingard struck twice either side of half-time to get the holders back on track following their shock Premier League defeat at Huddersfield Town on Saturday.

Mourinho blasted his side for lacking the required desire in that match and responded with seven changes at the Liberty Stadium.

And the Portuguese boss got his wish for a more professional display as the Red Devils sealed their place in the quarter-finals with a routine victory.

"The attitude was very good. From the first minute we felt we were in the game," Mourinho told Sky Sports.

"We were solid, we were compact, we were in control.

"I'm really happy because it was quite comfortable and there were no injuries, so it was a good game for us."

"Solid - professional from the first minute."Jose Mourinho has his say on tonight's win for ... October 24, 2017

United will aim to continue their return to form when high-flying Tottenham visit Old Trafford in a blockbuster clash on Saturday.

Two-goal hero Lingard staked his claim for a starting place and said the win over Swansea was an ideal response to their first competitive defeat since the UEFA Super Cup in August.

"Since the weekend we have been working hard on the training pitch," the England international said.

"We have learned from it and moved on. I thought we were in control."