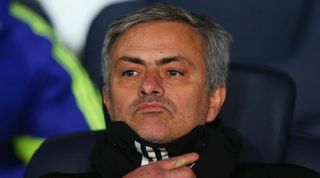 The Portuguese hit out at referee Martin Atkinson after last week's 1-1 Premier League draw with Burnley, having seen midfielder Nemanja Matic sent off for his reaction to a coming together with Ashley Barnes.

Matic responded furiously when caught by Barnes' studs in the second half, with Mourinho, and Chelsea as a club, subsequently highlighting four instances in which they believed Atkinson made the wrong decision.

Anthony Taylor will take charge of Sunday's final at Wembley, and Mourinho has no fears over his performance.

"I don't believe that anyone involved in this game doesn't want to make his best," he said.

"I believe all three teams [Chelsea, Tottenham and the officials] will go with the same ambition to do very well, and hopefully even the players that like to complicate things, even they will try to make the final a big final."

Matic had his suspension reduced from three to two matches by the Football Association this week. Asked for his opinion on the move, Mourinho added: "If I give you my views, it is bad for me.

"If I speak again about the Matic situation, I promise you I will be in big trouble."