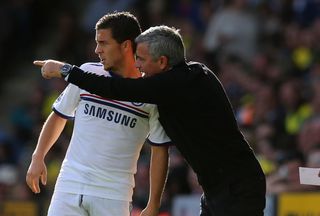 Hazard made an immediate impact at Chelsea following his £32million move from Lille in June 2012, scoring nine Premier League goals in his debut season while establishing himself as a firm fan favourite at Stamford Bridge.

The 23-year-old Belgian has already scored eight league goals this term, and has started 19 of his club's 20 top-flight matches under the stewardship of Mourinho.

Four of Hazard's Premier League goals this season came in December, and Mourinho feels the winger has worked hard to improve since the start of the season.

"He is progressing in everything," said the Portuguese.

"He was known as one of the worst trainers - he's now become, not one of the best, but a good professional in training.

"He was training to have some fun. He's a funny boy, a funny kid, always smiling, always laughing and having a joke.

"It's been a fantastic evolution for him - the next phase is to play Champions League knockout phase, which brings a lot of pressure on him because it's a knockout.

"Also, he will have the experience of playing in the World Cup, which will be fantastic for him."

Chelsea travel to Hull City on Saturday, knowing a win would lift them top of the Premier League until at least Sunday, when Manchester City visit Newcastle United.