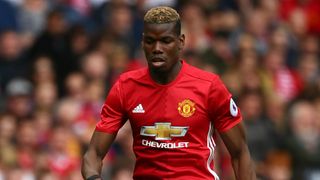 Paul Pogba is not being used properly by Manchester United manager Jose Mourinho in his first season at Old Trafford, according to Thierry Henry.

United midfielder Pogba has received mixed reviews for his performances since re-joining from Juventus in a world-record £89.3million move, racking up 50 appearances across all competitions and scoring eight goals.

Former France international Henry believes his compatriot has been played too deep by Mourinho this season, but backs the 24-year-old to improve significantly in 2017-18 with less pressure on his shoulders.

"It was always going to be difficult for Paul Pogba," Henry said to Sky Sports.

"They don't use Pogba where he should be playing - he's not a holding midfielder. He likes to play higher or off the left.

"You lose a bit of him when he plays deeper. When you have a price tag like his, people are always going to talk. It could be good if someone comes in during the summer with a bigger price tag, then people might leave Pogba alone.

"I think his second season can be better. He's got much more to offer."

Pogba scored in Sunday's 2-0 Premier League win over Crystal Palace on his return from compassionate leave following the death of his father.

Despite disagreeing with Mourinho's use of the midfielder, Henry believes the former Chelsea boss will have succeeded in his debut campaign at Old Trafford if he can secure glory in the Europa League by beating Ajax in Wednesday's final.

Henry added: "Are they entertaining? Are they a nice side to watch? At the end of the day, it will be the EFL Cup and the Europa League - if they win it.

And Henry, formerly of Arsenal and Barcelona, advised Wayne Rooney to leave United if he cannot establish himself in Mourinho's plans.

"Everyone would love to see Wayne Rooney finish his career at Manchester United, but I doubt it," he said.

"I think he might have to go. When you have a player like Rooney and he's not playing, what's the point?

"If he's not part of the team, then he should go. That's exactly what John Terry said when he left Chelsea."