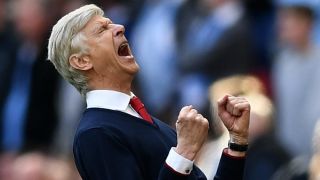 Arsene Wenger has signed a new two-year contract at Arsenal, ending months of speculation over his future.

The Arsenal manager has already been in charge for almost 21 years and is now set to continue in the role until at least 2019.

Wenger's reign at the club has produced significant highs and lows, including the Invincibles season in 2003-04 and their failure to finish in the top four for the first time since the Frenchman took charge in the campaign just finished.

With the help of Opta, we look at some of the best facts from Wenger's reign to date:

70 – Of the managers he has faced at least 15 times, Wenger fares best for victories against Steve Bruce, with 19 wins, six draws and two losses from 27 games (70 per cent win rate).

12 – At the other end of the scale, his worst record is against Manchester United boss Jose Mourinho, who he has only beaten twice in 17 attempts, drawing seven and losing eight (12 per cent win rate).

104 – Of the players currently in Wenger's squad, Theo Walcott has scored the most goals under Wenger with 104, just ahead of Olivier Giroud (98).

6 – Wenger has finished second and fourth most often in his Premier League career (six times each). He has won the league three times, come third on five occasions and fifth once (this season).

12 – Wenger has managed in 12 major finals at Arsenal, tasting victory on seven occasions – including each of his last three.

228 – With 228 goals, Thierry Henry has scored the most goals under Wenger at Arsenal, with Robin van Persie (132) in second.

306 – Of his home matches, Wenger has managed 306 at Emirates Stadium, a total that surpasses the 265 he took charge of at Highbury.

58 – Manchester United have been Wenger's most frequent opponents (58 games), Alex Ferguson is the boss he has come up against most (49) and Old Trafford the away ground he has managed at more than any other (30).

11 – Wenger won 11 trophies in his first 10 years at Arsenal, but has only won five since.

71 – Of the teams he has faced at least 20 times, Wenger has the best win rate against Wigan Athletic (71 per cent) and the worst against Manchester United (31 per cent).

64 - Craven Cottage has been his most successful venue, with seven wins from 11 games, giving him a 64 per cent win rate.

93 – Arsenal have scored more goals against Everton (93) under Wenger than any other team, with Tottenham (92) next on the list.

84 – They have conceded the most in matches against Chelsea (84), with Liverpool (81) just behind.