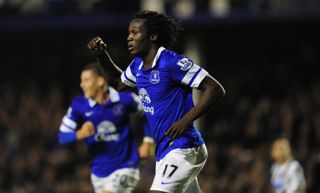 Striker Lukaku has made a stunning start to life at Goodison Park, scoring three goals in two Premier League appearances since signing for the season on transfer deadline day after being deemed surplus to requirements at Stamford Bridge.

By contrast, none of Chelsea’s three forwards - Samuel Eto'o, Fernando Torres and Demba Ba - have found the net in the top flight this campaign.

However, Mourinho has insisted he does not rue allowing the 20-year-old to leave, indicating the Belgium international is not yet ready to play for his parent club.

When asked if he regrets his decision ahead of Chelsea’s trip to Norwich City on Sunday, the Portuguese replied: "No…one thing is to play for Everton, another is to play for Chelsea."

Torres was embroiled in controversy during Chelsea's 1-1 draw at Tottenham last week and was sent off after a collision with Jan Vertonghen following a running battle with the defender.

The Football Association opted against issuing further punishment to the Spain international in midweek, despite footage showing he scratched Vertonghen in the face.

Tottenham boss Andre Villas-Boas labelled that decision a "disgrace", but Mourinho feels the governing body got it right.

"I think the FA (have) defended (the) principles and values of English football."

Mourinho went on to say Torres should return from the knee injury he sustained in Chelsea’s UEFA Champions League victory at Steaua Bucharest for the clash with Manchester City on October 27, but Eden Hazard could be back in contention for the game at Carrow Road after an ankle problem.