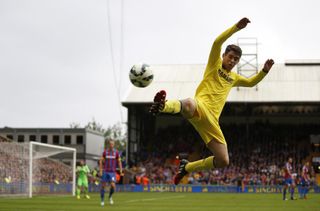 The Brazil international scored his side's first goal in the 2-1 win at Crystal Palace on Saturday as Chelsea maintained their five-point lead at the top of the Premier League.

"Oscar did fantastic against Arsenal and again [at Palace]," said Mourinho.

"For example, in the first half when they had [James] McArthur playing man-to-man with [Cesc] Fabregas, I was so happy with that.

"Fabregas was taking McArthur from the central area and Oscar was dropping back to play. Oscar and [Nemanja] Matic controlled the game completely for us.

"Oscar, at this moment, is not a number 10. He had an evolution - a mental, tactical evolution that allows him, in my opinion to be a fantastic player.

"People forget that he arrived here two years ago and he is still so young."