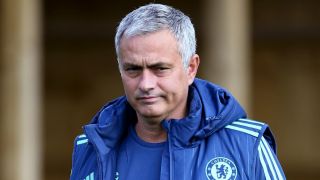 Stuttering Premier League champions Chelsea have given their full backing to manager Jose Mourinho following Saturday's 3-1 defeat at the hands of Southampton.

The loss at Stamford Bridge was Chelsea's sixth of the season and leaves the holders 16th in the table, as Mourinho faces his most difficult spell since returning for a second time.

Mourinho has been defiant since the defeat - dismissing suggestions he would leave his role - and was backed with a statement on the club's official website.

"The club wants to make it clear that Jose continues to have our full support," it read.

"As Jose has said himself, results have not been good enough and the team's performances must improve. However, we believe that we have the right manager to turn this season around and that he has the squad with which to do it."

Following the defeat Mourinho suggested Chelsea would be sacking the best manager in their history if they were to relieve him of his duties in a lengthy post-match interview.

"If they sack me, they sack the best manager this club has had," Mourinho told Sky Sports. "This is a crucial moment in the history of this club.

"I know what people are thinking, but it is not happening. I am not running away. I don't run away from my responsibilities.

Mourinho's relationship with his players has also been the subject of much discussion with Nemanja Matic withdrawn shortly after coming on as a half-time substitute on Saturday.

Amid questionable form from the likes of John Terry, Cesc Fabregas and Branislav Ivanovic the former Real Madrid boss was critical of his star players prior to Saturday's loss.

However, he clarified on Sunday his intention to stay unless he lost the trust of the dressing room.

"If they tell you they don't trust me, that is the only thing that can make me resign. The only thing. But not fake sources. The players at the table," he explained.