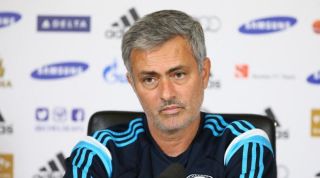 Mourinho was active in the close-season as he lured Diego Costa, Filipe Luis, Loic Remy and Cesc Fabregas to Stamford Bridge, while veteran striker Didier Drogba also made an emotion return to the club.

Bolstered by the arrival of that particular quintet, Chelsea have set the pace at the top of the Premier League, reached the League Cup semi-finals and will face Paris Saint-Germain in the last 16 of the UEFA Champions League.

However, given the club's financial backing, Chelsea continue to be linked with a host of top players – including Real Madrid defender Sergio Ramos - but Mourinho is not anticipating any activity in the transfer window next month.

"We have a short squad but we've got good players, some younger, some older, but the squad is very, very good," Mourinho told talkSPORT.

"Our project is to start and finish the season with the same group of players, so there will be nobody to leave and nobody to come in either."