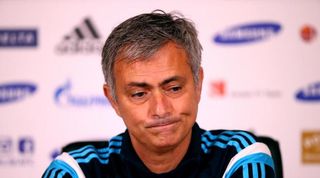 The 26-year-old has scored 11 goals in as many games for Chelsea in the Premier League since moving from Atletico Madrid, but he will not be involved on Wednesday as he serves a one-match ban.

Costa was shown a fifth yellow card of the season against Sunderland on Saturday, meaning Mourinho will have to turn to Didier Drogba or Loic Remy against Tottenham.

The Chelsea boss is not concerned, though, and expects whoever he selects to replace the Spain international to deliver.

"We trust Remy and Drogba the same way we trust Diego," he said. "Forget Diego, we trust the other two and we go with the other two."

And Mourinho is keen to ensure his side remain positive despite the surprising draw at the Stadium of Light last weekend.

"[The team reaction has been] normal," he added. "What do you want when the team is doing a perfect season?

"The team has to feel very well, when the defeat arrives we have to feel in the same way, we are doing things very well.

"One result is not going to change our self-belief and self-esteem."

Chelsea have not lost a home league game to Tottenham since 1990, when Gary Lineker scored the winning goal.