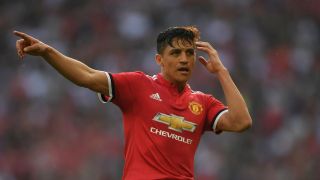 Alexis Sanchez could join several Manchester United stars sidelined during an interrupted pre-season which Jose Mourinho fears will have a lasting effect.

United hoped Sanchez would be one of few experienced forwards on their tour of the United States but the Chile star has been denied a visa after accepting a suspended sentence for tax fraud in Spain earlier this year.

His absence leaves Mourinho with just Anthony Martial and Juan Mata to choose from in attack as Romelu Lukaku, Jesse Lingard and Marcus Rashford remain on holiday after their lengthy World Cup campaigns.

David de Gea, Nemanja Matic and new signing Fred are expected to link up with the squad next week, prior to the first of three International Champions Cup clashes.

"It's not good for anyone but there is no one to blame. I know the club is making the effort. I have to respect the US authorities in their process of selection for visas.

"Hopefully he will come to join us later because it would be important to at least work with Alexis, Mata and Martial, who are the players I think we have in attack for the start of the season.

"No Lukaku, no Lingard, no Marcus Rashford.

"So if Alexis is not working with us for another 15 to 20 days that will be bad."

The boss on : "We started the process [of signing him] a long time ago - he is exactly the type of player we need to complement our midfield." July 18, 2018

Mourinho bemoaned the preparation "as very bad" despite the enforced opportunities that will be provided to young players.

"But everything is really bad and then we go to the UK and have to play in the Premier League.

"The Premier League and broadcasters, they were not nice to us by giving us the Friday match [against Leicester]. That complicates things. I would lie if I said I am not worried about it, but it is what it is."