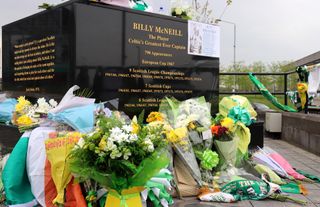 Sir Alex Ferguson was among the mourners gathering to pay their respects to former Celtic captain and manager Billy McNeill.

McNeill’s funeral is being held at a church in Glasgow city centre before the cortege makes its way to Celtic Park, where thousands of supporters are expected to pay tribute.

McNeill’s body was taken to St Aloysius Church on Thursday evening ahead of a service at 11.30am on Friday morning.

Some streets in the city centre and east end of Glasgow will be closed, with fans expected to line the pavements to pay respect.

Former Rangers striker Ferguson was among those to arrive at Celtic Park, where buses were waiting to transport mourners to the church.

McNeill, who won 31 trophies as player and manager for Celtic, died last week aged 79 after suffering from dementia in recent years.

'Where you went others followed'— Celtic Football Club (@CelticFC) May 3, 2019

In a statement earlier this week, McNeill’s five children extended an open invite to fans to pay their respects.

They wrote: “The love and affection shown towards our father is nothing short of amazing.

“Our father always made time for the fans and knew how important they are so we would like to send an open invite to help us pay our respects to him.

“His body will be taken into St Aloysius Church on Thursday evening at 6.30pm, with the church staying open for a short while after the service.”