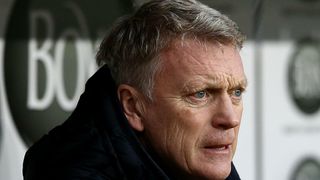 Sunderland boss David Moyes admitted he skipped the traditional fans' appreciation at the end of the final fixture of the season at the Stadium of Light for fear of making the hostile atmosphere worse.

Moyes' rock-bottom side turned in another woeful display in losing 2-0 to relegation-threatened Swansea City on Saturday - the visitors easing to victory courtesy of goals from Fernando Llorente and Kyle Naughton - with the home fans again venting their frustration at the former Everton and Manchester United manager.

Chants of "we want Moyes out" were heard repeatedly throughout the 90 minutes and Moyes admitted that come the final whistle he didn't want to antagonise the supporters further and opted to head straight back to the sanctuary of the dressing room.

He told reporters: "Fans were showing their disappointment at me, and I didn't want to make it any worse so I went down the tunnel.

"The reason this is a great football club is the fans. We are all disappointed, we are all embarrassed."

Sunderland's fragility was summed up when Moyes admitted the opening goal - scored after just nine minutes - was key to their defeat.

The Scotsman added: "It was as poor as we have played for the last month or so.

"It came down to the first goal. We had a mountain to climb after that."

Moyes will seek further talks with owner Ellis Short over his own future at the Stadium of Light but conceded there will be wholesale changes at the club between now and August.

He added to BBC Sport: "Everyone watching can see we need big changes. We need to alter the playing staff and I think everyone is aware of that."