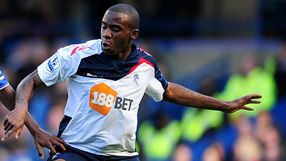 Coyle told reporters that Muamba, who will be 24 on Friday, was out of bed and walking down a corridor in the intensive care unit of a London hospital, where he has remained since he collapsed on March 17.

"He's taking steps, talking and has that big smile we love to see. He is progressing the right way," said Coyle, when asked for an update on the player's condition.

The former England Under-21 international was described as 'technically dead' for 78 minutes after his collapse during the FA Cup quarter-final tie at White Hart Lane. He was given 15 defibrillator shocks before he reached hospital.

His family posted a first public picture of him on Twitter from his hospital room last week and he has received thousands of get-well messages from players, officials and supporters.

Coyle added: "We have to stress that he still has a long way to go, but the improvement has been remarkable and long may that continue."