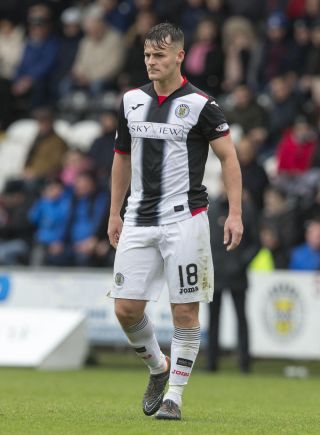 Mullen notched his first league goal of the campaign – his second this season – when he scored the Paisley outfit’s second in their 2-0 win over St Johnstone last Saturday.

St Mirren had drawn a blank in their previous three outings but ended their goal drought in stunning style through Jon Obika’s sensational overhead kick before Mullen finished off a flowing team move.

Mullen was thrilled to get off the mark in the league and now wants to get to double figures as quickly as possible.

Mullen said: “As a striker you want to score your first goal as quickly as you can and it’s taken me a few weeks to get my first one in. It’s come now, so hopefully we can kick on.

“To get off the mark in the league was a nice feeling and hopefully I can take confidence from that in the coming weeks.

“My target is just to try to get as many as I can this season and hopefully get into double figures and if I get there push on from that.

“I’ll take any goal I can get, they are always a bonus. I’ll take scrappy goals or good goals, I’m not really bothered what way they go in as long as they hit the back of the net.”

St Mirren have been struggling for goals this season, scoring just three in eight league matches before the St Johnstone clash.

Mullen added: “These things happen when you are waiting on a goal and eventually two come at once and they were two good goals. Hopefully we can get a good few more in the next few weeks.

St Mirren travel to fifth-placed Kilmarnock on Saturday and hope to pick up their first points on the road this season, having lost all four away matches in the league.

And Mullen believes they can build on their win over St Johnstone.

He said: “It’s always good to come in the week after you get a win and to get the win the way we did.

“To get the two goals and keep a clean sheet was another positive we can take from the game to take into the Kilmarnock game.”