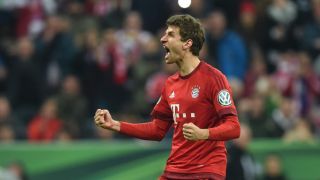 Bayern Munich forward Thomas Muller sees no reason to panic following Borussia Dortmund's busy transfer market and feels it will only be "more fun" to beat their Bundesliga rivals again this season.

Muller is adamant Dortmund are still a force to be reckoned with following their squad overhaul, but remains confident that Bayern - who beat BVB to the Bundesliga and DFB-Pokal titles last season - have what it takes to come out on top again.

"It's good fun when your Germany team-mates play for your main rival at club level. It is important for Bayern and for the Bundesliga that Dortmund are strong," Muller told Sport Bild.

"They put up a great fight last season and set a new point-record for the runners-up for a reason.

"It's an extra incentive for us [that Dortmund have strengthened their team]. That only makes it more fun to beat them again.

"Dortmund have signed a lot of high-quality players. I'd say they are favourites to win the title alongside Bayern.

"The major squad changes could be a boost for them."