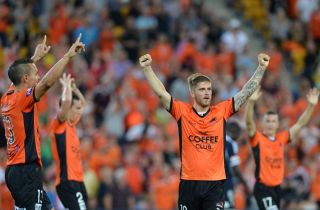 A Besart Berisha goal just before the hour mark decided the contest and put the Roar into the Hyundai A-League Grand Final, though the game ended in controversy with referee Strebre Delovski denying a strong penalty claim for the Victory in injury time.

The win means the Roar will host next weekend's decider at their home ground, while the Victory are left to rue another semi-final defeat.

It will serve as little consolation for the Melbourne side that the hero on the night, Berisha, will be wearing dark blue next season.

The excitable Albanian was unusually restrained in his celebrations after he went on a slaloming run down the left flank in the 58th minute and smashed a powerful shot past Victory goalkeeper Nathan Coe.

Even though he has proved a match-winner on several occasions this season, and boasts one of the most impressive goal-scoring records in the A-League, the loss of Berisha will not be overly detrimental to the Roar next season, according to Mulvey.

"No, we'll find somebody else. It's fine," the Roar coach said when asked if his side would miss their star striker next season.

"Who else was going to score the winner today?

"He's a fabulous player, you saw his value tonight."

As for the result, Mulvey said the Roar deserved to go through to the Grand Final, regardless of the late controversy.

With Brisbane weathering a late Victory onslaught, captain Matt Smith slid in on Mark Milligan in the Roar box and appeared to make contact with his legs, though Mulvey denied that it was a clear penalty.

"I saw bodies on the ground, I saw bodies committed. I'll defer to you, I need to see it a second time."

"I think that the better team ended up winning the game on the overall performance.

"But you got what you would expect from a semi-final tonight.

"You got two extremely committed teams who went for the jugular."