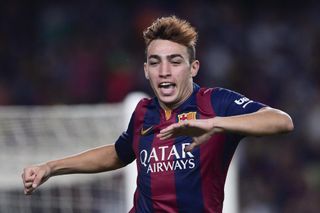 The graduate of La Masia was an ever-present under new coach Luis Enrique during pre-season and was rewarded with his Liga debut against Elche.

Lionel Messi scored the first after a frustrating start for the hosts and, although Javier Mascherano's red card just before the break gave Elche hope, Munir killed off their chances early in the second half.

The forward latched on to Ivan Rakitic's deflected aerial pass and directed the ball past the goalkeeper with a delicate flick of his left foot in the 46th minute.

He was eventually replaced by Pedro to a rapturous ovation and was left delighted as Luis Enrique's first competitive game at the helm was marked with a win.

"I'm very happy with my debut. I'm proud to score at Camp Nou with Messi and these players. I'm very happy," he is quoted as saying by Mundo Deportivo.

"Luis Enrique told me I did well, and wants it to stay that way. I will keep working on the same line and see what happens. Luis Enrique wants work, work, work every day and to improve.

"I dedicate the goal to my family, my father and my brothers. I've not even thought about the future."