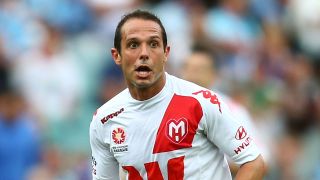 Shockwaves were sent right around the Australian football community last week when the English Premier League giants acquired an 80 per cent majority stake in the Heart.

Virtually all staff are now on notice at the Heart and Murdocca believes that kind of uncertainty and pressure is what great teams thrive on.

"It doesn't necessarily mean you are secure in your spot even if you do have a contract (beyond this season)," Murdocca said at Epping Stadium on Wednesday.

Murdocca said he and his team-mates were excited by the mystery surrounding the Heart's future but admitted the enormity of the Manchester City purchase probably would not sink in until next season.

"It will really hit us next year when they make massive changes, whether it's in the office, on field and maybe the colours as well, change of name, you just don't know what's going to happen," Murdocca said.

"When your future is bright, it usually (ensures it is) bright every day so we're all happy but at the same time uncertain."

Murdocca was adamant the announcement of the new ownership structure came at a 'great time' for the Heart who have only won one of their 16 matches to date this season.

"It probably wouldn't have helped us if it came at the end of the season," he said.

"We've got to pull our socks up and start working and start improving as a collective and I think we have been doing that which has been promising."

Despite their horror 2013-14 campaign, the Heart are still a faint chance to reach the finals as the bottom-placed club are 12 points adrift of the top six with 11 games to go.

But Murdocca was more concerned about giving the long-suffering Heart fans something to hang their hats on heading into next season rather than chasing an unlikely post-season berth.

"It (finals) is not the key thing for me, it's all about improving and finishing the season on a high and then building for next year especially with the new owners coming in," Murdocca said.

"We want to ... make sure that this year we give the fans something to remember for next season and to see a bit of light at the end of the tunnel.

"We're not that far off, we're really not, and when it's mathematically still a chance, we'll keep trying (to make finals)."

Next up or the Heart is a date with Sydney FC at AAMI Park on Friday night and John van 't Schip's men are desperate to atone for their last performance against the Sky Blues at the same venue, according to Murdocca, which ended in a 2-0 loss.

"Especially that first half, it just wasn't good enough, (we were) totally outplayed, our pressure wasn't there and all those areas are things we've been working on in the last month or two and I think we've really improved so it'll be a totally different ball game this time," Murdocca said.