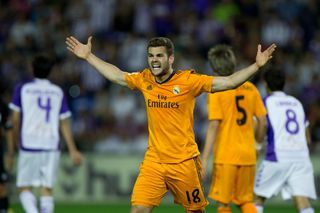 The 24-year-old has risen through the ranks at the Santiago Bernabeu, but has often been on the periphery of the first team.

However, the defender has proven to be a valuable squad member for Real, and made 12 La Liga appearances last season.

Nacho has now been rewarded with a new bumper deal that runs until the end of the 2020-21 season.

"Real Madrid announces the extension of Nacho Fernadez's contract for another six years [seasons] until 2020-2021," Real Madrid posted on their official Twitter account.

During his time in the Spanish capital, Nacho has collected the Liga title in 2012, as well as a UEFA Champions League and Copa del Rey double last term.

He also became a full Spain international when he made his debut in a friendly with Chile in Geneva last September.