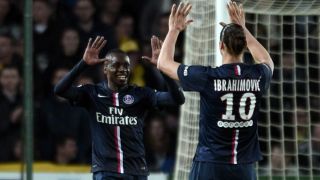 Edinson Cavani continued his hot streak in front of goal as Paris Saint-Germain claimed a comfortable 2-0 win at Nantes, moving the reigning champions back to the Ligue 1 summit upon Zlatan Ibrahimovic's return.

The Swedish star's foul-mouthed rant about referee Lionel Jeffredo following a 3-2 loss to Bordeaux in March earned him a three-match ban, but the 33-year-old produced a lively display upon being reinstated, having a hand in both goals as Laurent Blanc's men cruised to victory.

Nantes rarely posed much of a threat to Nicolas Douchez in the PSG goal and, while Ibrahimovic saw a penalty shout turned down early in the second period, the two-goal lead looked unassailable.

The away side saw out the final stages in confident fashion to restore their three-point lead ahead of Lyon in the title race with three games to go.

PSG looked lively right from the start and it came as little surprise to see Ibrahimovic at the centre of things as the champions took a third-minute lead.

Cavani deflected the Swede's left-footed effort into the path of Gregory van der Wiel, who controlled on his chest before seeing the striker pounce and sweep home from close range.

The striker raced on to Marco Verratti's throughball in the 11th minute and fired straight at Remy Riou instead of squaring to the irate Ibrahimovic, before failing to beat the goalkeeper with a second opportunity.

It appeared to be only a matter of time before PSG would double their advantage and Javier Pastore skilfully skipped past two challenges inside the area in the 20th minute, only to see Riou produce a smart save.

A second goal did come the way of PSG just after the half-hour mark and Ibrahimovic was once again integral, nonchalantly placing a pass between Papy Djilobodji's legs for Matuidi, who emphatically slammed an effort past Riou.

PSG began the second half in similarly positive fashion, getting players forward quickly as they looked to vanquish any threat of a potential Nantes revival.

And the visitors were adamant that they should have been given the opportunity to score a third from the penalty spot in the 50th minute, but referee Ruddy Buquet saw nothing warranting a foul as Djilobodji tangled with Ibrahimovic.

PSG began to sit back as the match entered its final half-hour, with Blanc seemingly confident of holding on to a two-goal lead.

And although Nantes enjoyed a larger share of the ball towards the end, PSG had no trouble closing out the game to go clear of Lyon once again.