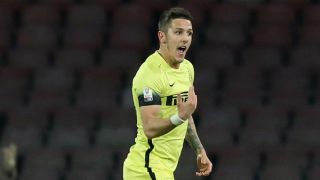 Inter gained a measure of revenge over Napoli to move into the semi-finals of the Coppa Italia courtesy of a 2-0 win at Stadio San Paolo on Tuesday.

Napoli beat Inter in the quarter-finals last year but goals from Stevan Jovetic and Adem Ljajic - either side of Dries Mertens' dismissal - capped a frustrating night for Maurizio Sarri and his Serie A leaders.

Inter failed to muster a shot in the first half and were perhaps fortunate to be level at the break as goalkeeper Samir Handanovic continued his fine form to deny Mertens and Jose Callejon.

Roberto Mancini's men rallied after the break and, despite bringing leading scorer Gonzalo Higuain off the bench, Napoli fell behind when Jovetic produced the visitors' first moment of real quality with 74 minutes on the clock.

Inter's first win over Napoli in eight attempts was made slightly easier in the final stages as Mertens was shown a second yellow card for diving inside the penalty area amid minimal contact from Miranda.

And Jovetic then turned provider for Ljajic, who sealed the tie with a cool finish on the break in stoppage time.

Mancini's side await the winners of Juventus and Lazio in the semis, while 2014 Coppa winners Napoli are left to focus on Serie A and the Europa League.

While Napoli rested Higuain and Lorenzo Insigne, Mancini dropped Mauro Icardi to the bench and named Juan Jesus in place of Jeison Murillo following the Colombian's own-goal at Atalanta on Saturday.

Chances proved few and far between until Mertens - handed a rare start in Sarri's forward line - tested Handanovic with a curled effort 14 minutes in.

As Inter struggled for attacking impetus, Callejon's side-footed effort was saved by Handanovic after a clever pullback from Ivan Strinic.

The visitors were given two more let-offs when Callejon and Mertens failed to pick the right pass in the final third although Inter saw penalty appeals waved away when Kalidou Koulibaly looked to handle inside the area shortly before half-time.

Jovetic had Inter's first effort on target from distance shortly after the hour - Pepe Reina equal to it - before Gary Medel's sent an effort over the crossbar during Inter's first prolonged spell of pressure.

Higuain was brought on with 19 minutes of normal time remaining but Napoli fell behind soon after the Argentinian's introduction as Jovetic curled a stunning strike past Reina.

Jovetic opted against playing in Rodrigo Palacio and instead placed the ball into the top right-hand corner to register his first goal since mid-December.

With dangerman Higuain leading the line, Napoli piled on the pressure in search of an equaliser - the striker glancing Mertens' cross wide before almost following up on the Belgian's saved shot with his head.

But Mertens' dismissal for simulation three minutes from time both summed up Napoli's desperation, before Ljajic doubled the advantage as tensions boiling over on the sidelines with Sarri and Mancini clashing at the end of an entertaining contest.