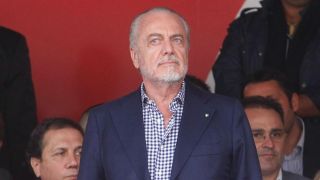 Serie A club Napoli are "certain" they do not have a case to answer with regards to the Operazione Fuorigioco investigation into alleged tax evasion in Italian football.

Reports on Tuesday claimed 64 individuals from 35 clubs in Italy's top two divisions were to come under scrutiny as part of the investigation by Naples prosecutors.

Operazione Fuorigioco, which translates as Operation Offside, relates to suspected tax breaches and AC Milan were quick to deny any wrongdoing on the part of their chief executive Adriano Galliani.

Milan said any claims against their CEO were "absolutely marginal and not founded" on Tuesday, while Napoli issued a similar statement a day later relating to their president Aurelio De Laurentiis.

"Yesterday the Prosecutor of Naples notified President Aurelio De Laurentiis of the conclusion of preliminary investigations involving a VAT dispute for a total amount of €8,321.04," it read.

"The club and its lawyers place absolute confidence in the work of the judiciary and confirm that Napoli has always worked in strict compliance with all applicable regulations, and are therefore certain that this will be reflected in a dismissal of the proceedings."