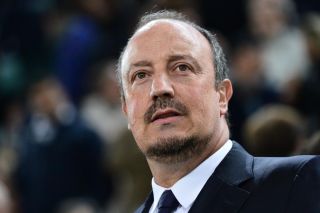 Benitez's men were soundly beaten by the defending Serie A champions on Sunday, Fernando Llorente opening the scoring with just two minutes gone, before stunning strikes from Andrea Pirlo and Paul Pogba wrapped up the points in the second half.

Juventus did have Angelo Ogbonna sent off seven minutes from time, but by that point the result had long been settled.

And Benitez admitted they will need to produce better if they are beat title rivals Roma and Juve.

"We shouldn't forget that we played against the team which won the last two titles," he said. "It's a very strong team.

"We have to improve our performance in order to win such matches.

"Tonight we didn't manage to make a good performance at the beginning of the match, therefore we had to work hard in order to try to change the result."

The result sees Napoli drop to third in Serie A, three points adrift of Juve and four behind leaders Roma, who were surprisingly held to a 1-1 draw against Sassuolo.

Benitez, however, is pleased with his side's start to the campaign.

"I believe that up to now we've made a good job," he added.

"Of course we made some mistakes in some matches. It can happen against strong teams, such as Juventus and Roma. The same goes for the match against Arsenal (2-0 defeat in the UEFA Champions League).

"We have to be more precise in order to improve."