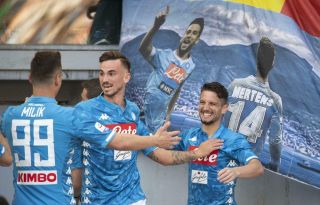 Arkadiusz Milik and Dries Mertens were among the scorers as Napoli thrashed Roma 4-1 at the Stadio Olimpico.

Milik put the visitors ahead with a delightful second-minute effort, his 16th Serie A goal of the season.

Roma levelled in first-half stoppage time through Diego Perotti’s penalty, before Mertens put Napoli back in front four minutes after the break.

The result sees the gap between Carlo Ancelotti’s second-placed Napoli and leaders Juventus go back to 15 points.

Roma – for whom it was a second successive defeat in their third match since re-appointing Claudio Ranieri as boss – had slipped a place to sixth in the table ahead of kick-off due to Atalanta winning at Parma earlier on Sunday.

Ancelotti’s men opened the scoring in fine style when Verdi produced a dinked pass to Milik and the Poland striker brought the ball down on the turn with a wonderful touch before firing past Robin Olsen.

Roma’s Steven Nzonzi missed with a header from a good position in the 18th minute, and Olsen subsequently made a decent save to keep out a shot from Verdi.

Perotti headed wide moments later and Milik then put the ball in the hosts’ net again but the flag was up for offside.

The equaliser came when Patrik Schick was brought down by goalkeeper Alex Meret, referee Gianpaolo Calvarese pointed to the spot and Perotti sent the Napoli number one the wrong way.

Mertens restored the away side’s lead with a tap-in at the far post after Jose Callejon’s low cross had gone under the diving Olsen.

And the advantage was soon extended as Napoli broke from their own half with Fabian Ruiz bursting down the left, he played a ball into the box and Verdi lashed it in.

Roma came close to pulling a goal back in the 73rd minute when Bryan Cristante’s shot was parried by Meret and Nzonzi headed the loose ball against the bar.

Younes then wrapped up Napoli’s victory seven minutes after replacing Verdi, slotting in on the follow-up after his initial shot was blocked by Olsen.