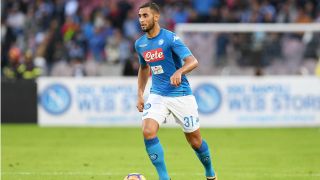 Napoli left-back Faouzi Ghoulam underwent surgery on his knee on Wednesday, the Serie A club have confirmed.

However, the full-back then fractured his knee cap in training, keeping him out until May, although he did appear in Napoli's squad for their final three fixtures.

And the 27-year-old has now undergone a minor procedure at the Villa Stuart medical facility in Rome and will be monitored over the coming week, according to a statement on Napoli's official website.