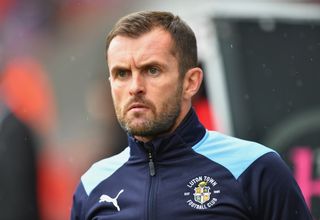 Nathan Jones picked up a point on his return as Luton manager as Callum McManaman earned the Hatters a 1-1 draw with Preston.

It looked like the hosts would suffer a demoralising defeat in their bid to stay up, falling behind early in the second half to Scott Sinclair’s strike but, with three minutes to go, McManaman powered home from 22 yards and earn his side a share of the spoils.

The fine goal gave Jones – asked to return to Luton after the departure of Graeme Jones during the season’s recess – something to smile about as he bids to stave off relegation.

With both sides back in action for the first time since the season was suspended due to coronavirus in early March, it was an understandably slow start, Luton having the first effort of note, Matty Pearson’s glancing header from Ryan Tunnicliffe’s deep cross falling well wide of the target.

Preston then started to get the upper hand, though, Sean Maguire’s low effort from outside the box deflecting inches past the post.

Town fashioned another decent chance when Declan Rudd’s punch from a corner did not gain enough distance, but Harry Cornick and Glen Rea both left the ball to each other inside the penalty area and the opportunity went begging.

With 35 minutes gone, Town needed a sharp stop from Croatia international Simon Sluga to keep them level, as he was out quickly to deny Maguire after a shot rebounded into the visiting attacker’s path.

Paul Gallagher then tried his luck from 20 yards, shooting straight at Sluga, the stopper easily collecting his side-footed attempt that lacked power.

After the break it was the visitors – who had looked the stronger – with the breakthrough, as Luton were caught short defensively on the right.

A slip by Martin Cranie allowed Sinclair to race away and the former Manchester City and Celtic winger, who arrived at Deepdale in the January transfer window, beat Sluga into the bottom corner to net his second goal for the club.

Sluga then prevented Preston doubling their lead, parrying Gallagher’s free kick away after he took aim from 20 yards.

It was almost game over when Ben Pearson thundered a shot goalwards from just outside the box, but his rising drive did not come down in time.

Luton boss Jones made all five of his changes in a bid to pep up his attack, and they had the desired effect as a quick break from the back saw James Breen find McManaman,

The winger cleverly created an angle for himself, before 22 yards from goal, hammering his shot beyond Rudd and into the top corner to level the scores.

Luton almost had an immediate second as well, Tunnicliffe’s shot just missing the target by a matter of inches, as both sides had to make do with a point.