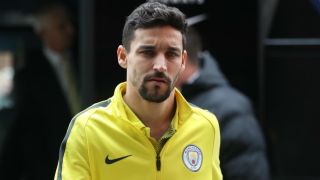 Manchester City have announced that Jesus Navas is to leave the club after four years at the Etihad Stadium.

The 31-year-old is one of a number of senior players whose contract is due to expire in the coming weeks and he has been linked with a return to Sevilla.

Reports in England this month suggested that manager Pep Guardiola was prepared to offer Navas a new one-year deal after being impressed with his versatility in a season during which he has played as a winger and a full-back.

However, City confirmed on Thursday that Navas is to depart.

"Jesus Navas' four-year spell at Manchester City has come to an end with the club confirming he is to leave this summer," read a City statement.

City director of sport Txiki Begiristain told the club's official website: "Working with Jesus has been a pleasure. His hard work, dedication, professionalism and desire to win have been apparent every single day.

"He showed his versatility numerous times this season, operating at full-back and doing so with distinction.

"I wish him all the very best with his next move."

Navas, who signed from Sevilla in 2013, won the Premier League and two EFL Cups in his time in England.

He follows full-back Gael Clichy in leaving the club, with the France international's exit having been confirmed earlier on Thursday.