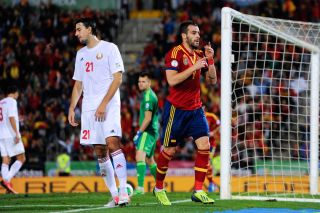 Swansea City striker Michu was favoured ahead of Negredo for the 2-1 FIFA World Cup qualifying win over Belarus on Friday, but the Manchester City forward found the net after being brought on as a substitute.

However, given the degree of competition for places in the world and European champions' team, Negredo believes he needs to continue scoring if he is to become first choice for his country.

"It's very tough in the national team, there are a lot of good players, so when we go out on the pitch we give it everything, and sometimes things go well and sometimes they don't," he said.

"As strikers we live for goals. In the last game against Belarus I was fortunate enough to get on the pitch and score the second, on other days things don't go so well.

"You need to take advantage of the minutes you get because the competition is tough."

Spain were frustrated for large parts of Friday's game and were unable to break through a stubborn Belarusian defence until Xavi's goal a minute after the hour mark.

And Negredo believes Spain will face a similarly tough task against Georgia on Tuesday in their final World Cup qualifier.

"It will be difficult because Georgia will get 11 players behind the ball, but we will keep playing the same way," he added.

''Despite the fact that we've teams have made it difficult for us in a lot of matches, we've let few games get away from us. We have to keep the ball and take advantage of the chances we get.''

Spain are all but assured of a place at Brazil 2014 ahead of the match, with Del Bosque's men leading France by three points with a superior goal difference.