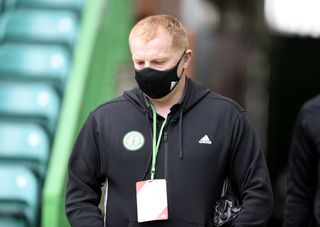 The 28-year-old Republic of Ireland defender signed for his boyhood heroes on loan from Brighton and scored a debut goal in the Hoops’ 5-0 win over Ross County in Dingwall on Saturday.

However, former West Ham, Sunderland and Republic of Ireland player Breen claimed Duffy might pick up a few bad habits due to the lower level of striker he would face in Scottish football.

He said: “That’s just someone who doesn’t know the game up here.

“I can give you a list as long as your arm of players who have come up here, thrived and gone on to better things or had a great career while they have been here.

“I think Gary’s comments are totally unnecessary, unfounded, there’s no sort of substance to them whatsoever and completely wrong.

“He had a great debut and got better as the game went on so he should take a lot of confidence from that and everyone was delighted for him.”

Lennon was aware that the Buddies were without their three first-team goalkeepers against Hibernian on Saturday due to Covid-19 issues.

Jak Alnwick and Dean Lyness both recorded positive tests, while third-choice goalkeeper Peter Urminsky was also ruled out as a precaution.

Saints boss Jim Goodwin signed Hearts goalkeeper Zdenek ‘Bobby’ Zlamal on an emergency loan although he was unable to stop his new team from going down to a 3-0 defeat.

Lennon said: “I think it’s just a question of Jim just trying to refocus again after what’s been a difficult week.

“I’m sure he will be looking for a response. He was pleased with the performance but not the scoreline.

“We have always found it really tough to play there, it’s a tight pitch. I’m just looking for us to build on the win from the weekend.”

The former Hibs boss believes positives tests could be an on-going feature of the season but that everything should be done to keep football going.

He said: “Well, first of all, I hope that the people involved are OK.

“And it’s probably just something that we’re going to have to sort of live with as we go along.

“We are trying to do everything right but sometimes these things can happen and can be out of someone’s control so we’re just going to have to get on with things.

“It’s a question of carrying on as best we can and hopefully getting through this and out the other side of it.

“I don’t know what advantage would be gained by stopping things and starting them up again.

“I don’t know how feasible that would be to start with, in terms of fixtures and the way the calendar is set out.

“I am hoping it won’t be necessary – unless there is a deluge and it gets out of control.

“It seems to be, in conjunction with a lot of other leagues around the world, you are getting a few positive tests.

“But we’ve got to carry, we must keep it going, I think it’s vital that we do.”