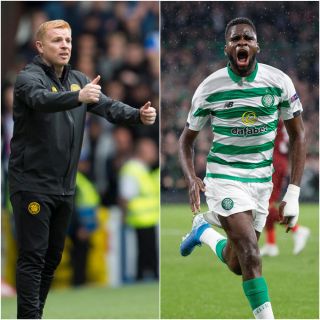 Celtic manager Neil Lennon believes Odsonne Edouard is becoming increasingly reliable after the in-form Frenchman scored his 10th goal of the season at the weekend.

It took the 21-year-old forward less than a minute of the second half to add his name to the scoresheet as Celtic hammered Ross County 6-0 to return to the top of the Ladbrokes Premiership table on Saturday.

He told Celtic’s official website: “I don’t want to wax lyrical about him (Edouard) every week, although he’s not that type of kid to get carried away, but you can see he’s in a good place.

“He’s a beautiful mover of the ball and his link-up play is getting better. I’m so happy he got the goal just after half-time because he deserved it, because he had a couple of good opportunities in the first half.

“He’s always a threat. He complements the players that are around him, he’s become more and more reliable and the volume of goals is testament to his own improvement.

“I thought Mo was fantastic from start to finish and I thought Jeremie Frimpong showed some great things in the second half.

“Scott Brown was immense, as was Callum McGregor – those two complement each other brilliantly – James Forrest had a great game. They were all bang on it and when they’re like that, they’re hard to stop.

“So it augurs well going forward.”