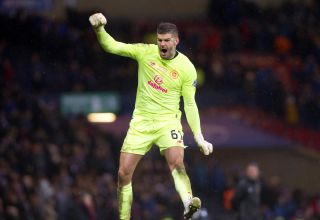 Celtic manager Neil Lennon remains hopeful of keeping Fraser Forster and Mohamed Elyounoussi in Glasgow despite the financial implications of the coronavirus pandemic.

The Southampton pair have joined Celtic’s pre-season training sessions because their loan deals no not expire until the end of June.

Goalkeeper Forster has two years left on his Saints contract and is reportedly attracting interest from other Premier League clubs after an impressive campaign in Scotland, while £16million winger Elyounoussi has three years remaining on his deal at St Mary’s.

When asked about the prospect of keeping the pair, Lennon said: “I don’t think it’s unrealistic. They are two players who added a lot to the squad last year and made a really positive contribution. So they are two players we would dearly love to have for next season.

“But we just have to wait and see. They are not our players. We will see how negotiations go. It’s good to see them back and involved and it would give us continuity if we could get those two in.”

However, Lennon admits the Scottish champions will generally bide their time over bringing new players in as they wait to see how the market develops in the wake of the Covid-19 crisis once other European leagues finish.

“We don’t know what the market is going to look like when it opens up again,” he said. “UEFA are trying to extend the transfer window until October so that might give us a bit more leeway in terms of bringing players in later on down the line.

“But financially it has certainly had an impact on the club, there is no question about that.

“But we are confident we can still attract players in and keep hold of important players we have at the club.”

Lennon has already reduced his squad after Jonny Hayes and Jozo Simunovic departed when their contracts expired.

With the club going for a record 10th consecutive Scottish title and Rangers desperate to stop them, there is a limit to any cuts Celtic might make.

“Already Jozo and Jonny have left so obviously we want to add to the squad and not break it up too much, I think continuity, for this season in particular, is going to be important,” he said.

“I would be very confident with the players we have got at the minute. They finished last season really strongly, the second half of the season was fantastic, and we have real quality and depth.

“Obviously as a manager you are always looking to add to that if you can but if it was to shut now I would be very happy with what I have.”

But he added: “It’s early and the way the market is, it’s going to be staggered. We will have to wait until some of the leagues are over before the majority of business gets done.

“And then we are going to see who is available. It might be loans and you might get some really good players on frees. We are in depth looking at players for the last couple of months in all areas.

“Patience is going to be key. A lot of business is done in the last week, you can get some really good business done. We are just going to have to bide our time and pick the right ones at the right moment.”

The goalkeeper situation is further unclear as Craig Gordon is out of contract.

Lennon said: “Talks are ongoing between the club and Craig. We haven’t seen him, he is not at training at the minute. Hopefully we get that resolved sooner rather than later.”