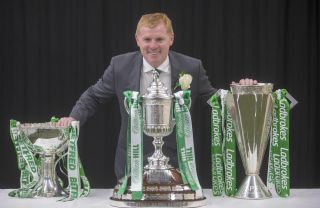 Neil Lennon has vowed to keep delivering trophies after being announced as Celtic manager on a 12-month rolling contract.

Lennon was offered the post on a permanent basis in the immediate aftermath of Saturday’s William Hill Scottish Cup final and a deal has now been finalised.

The former Celtic captain returned to the club in late February to begin a second spell as manager on a short-term basis following the sudden departure of Brendan Rodgers to Leicester.

After helping the club complete their third treble in a row, he now has the chance to maintain the Hoops’ domestic dominance.

Lennon, who won three titles and two Scottish Cups as manager from 2010-2014, told the club’s official website: “It is a massive honour to be named Celtic manager once again.

“I had always dreamed of returning to this role on a permanent basis and I am absolutely delighted to once again be part of one of the biggest and best clubs in the world – an institution which really does mean so much to me and one which has always been such a huge part of my life.

“When I was asked to take over in February, I felt it was my duty to do so. Celtic will always be my club and I wanted to help finish the job which had been started.

“I was delighted with the way the players stuck to their task and delivered another historic success, which is unlikely to ever be repeated.

“I was also delighted to receive such great support from our fans since returning, something for which I will be forever grateful.

“In the space of just a few weeks, trophy day at Celtic Park and securing the treble treble at Hampden are two of my greatest days in football.

“The energy, total commitment and passion from our supporters, the effort, the talent and desire from our players. It’s these qualities which make our club great and deliver such historic occasions.

“I want to be part of delivering more of these great days and great achievements and I look forward to working with the players, the staff and the fans to make this happen.”

The Northern Irishman will be assisted by John Kennedy – who he inherited from Rodgers’ back-room team – with Damien Duff continuing in his role as first-team coach having been promoted from his reserve-team post on Lennon’s arrival.

The former Bolton and Hibernian boss’ first stint in charge of the club saw him guide the Hoops to the first three league crowns on its current run of glory as well as masterminding Celtic’s famous Champions League triumph over Barcelona in November 2012.

Now chief executive Peter Lawwell has backed the 47-year-old to be just as successful second time around.

He said: “We’re delighted to name Neil as our new manager. Neil stepped up to the plate and answered our call in February, and in the difficult circumstances, played a huge part in delivering the treble to Celtic.

“We have known Neil as a player, captain, coach and manager. He has brought great success to Celtic in the past and we’re sure he’ll do so again in the future. He’s a Celtic man, a winner and someone we’re delighted again to have as part of the club.

“Neil has a great record in identifying players, and he has already been working hard in this area as we look to strengthen the squad this summer. We’re all looking forward to a positive future together.”