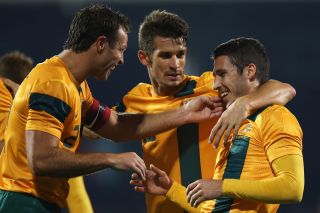 The captain, speaking on Monday after consecutive 6-0 defeats and the sacking of coach Holger Osieck, provoked the ire of many supporters when he suggested that the junior players in the national team set-up lacked the passion of their more experienced colleagues.

The team put their alleged divisions behind them to beat lowly Canada 3-0 in a friendly at Craven Cottage on Tuesday, and the veteran centre-back afterwards stood by his pre-match comments.

"I said during the week - and my words were twisted - that we needed spirit," he told Fox Sports.

"We found it tonight, we worked very hard for each other. We had a good game plan, good formation. We created a number of chances and we deserved the win tonight. We'll take a lot of confidence from that.

"I just wanted a call for passion, it wasn't me trying to put one against the other, or split old versus young. It was about everybody. When you have the shirt on, you have to wear it with pride. And tonight, we showed that pride in our performance.

"It's very pleasing, I'm very proud. It's been a tough couple of games. The reaction today has been excellent. As always, we lose together and we win together. Today was about the team. I'm very proud of the guys, I thought it was a great effort."

When asked if the young players on Tuesday showed the spirit that he previously claimed had been lacking, Neill said: "Of course, they did. As a result, with some hard work and effort, some really nice combination football at stages, we got a really well deserved win. It's nice after two very big defeats to come away with a very nice victory."

One such youngster was Mathew Leckie, who came off the bench to score his first goal for Australia, and he believes the players singled out for scrutiny by Neill acquitted themselves well.

"These things happen throughout national teams," he said, referring to Osieck's departure.

"We're all professional. Us players just have to worry about things on the pitch.

"I think the young guys that came in today, we really gave our best."

Australia are yet to announce their opponents for the next two international friendlies to be played on November 16 and 20, by which time a new coach - seemingly Ange Postecoglou or Graham Arnold - could be in place.