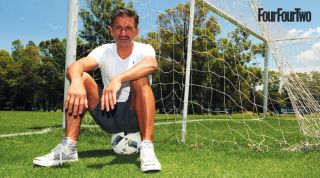 The former Argentina defender, who helped his country knock England out of the 1998 World Cup, is currently the coach of Estudiantes in his homeland and has been reminiscing about his three-year spell in the Premier League from 1998-2001.

Although Vivas predominantly provided backup for Gunners stalwarts Lee Dixon and Nigel Winterburn, the Argentine did start 18 games for Arsenal, scoring once.

But while the stopper may not be remembered by some Arsenal supporters, Vivas certainly left a mark on his team-mates before departing for Inter Milan. Thierry Henry once commented that one of the most dangerous things a player could ever do during training was attempt to pull off a one-two against the 5ft 5in defender.

“That's true – you can give the 'one' but you would hardly ever get the 'two',” jokes Vivas, speaking exclusively in the March 2017 issue of FourFourTwo magazine. “I remember Freddie Ljungberg baptised me ‘The Kicking Machine’. I have always done everything to try to win.

“I’d ask for yellow cards for the opposition players and then inside the dressing room they would all nag at me, because that is a lack of sportsmanship. Even during the training sessions, I got knocks and cuts. Don’t forget the group I trained with had Tony Adams, Martin Keown, Patrick Vieira...”

Vivas reserves special commendation for former Gunners skipper Adams. Even though the centre-back was edging towards the end of his 22-year, 500 league game-career during the Argentine’s time in north London, he remained a figure that everyone looked up to.

“Having a captain like Tony Adams was incredibly inspiring,” says Vivas. “After training, he would never walk across a pitch to save time and effort. Pitches were sacred, only used for playing football, never to just walk across. I have never experienced such feeling of perfection as I did while I was an Arsenal player.”

Read the full interview with Nelson Vivas in the March 2017 issue of FourFourTwo magazine. A South American special, we head round to Ronaldinho’s house to hear what the Brazilian trickster is planning next, chat to Manchester City defender Pablo Zabaleta about learning English while watching Coronation Street, reminisce with former Real Madrid forward Robinho and meet up with Bayern Munich enforcer Arturo Vidal. Plus, we find out why Oscar swapped Chelsea for China, look back on the early days of Diego Maradona’s career at Argentinos Juniors, learn that West Bromwich Albion powerhouse Salomon Rondon doesn’t actually like heading, and find out how Chapecoense go about healing a club and local community following November’s plane tragedy in Colombia. Order it now, and then subscribe here!