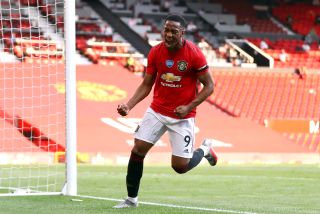 Nemanja Matic believes Anthony Martial’s maiden Manchester United hat-trick is the first of many given the way the forward is improving.

A revelation under Louis Van Gaal but a headache for Jose Mourinho, the 24-year-old looked set to leave for pastures new during the Portuguese’s time in charge.

But Ole Gunnar Solskajer put his faith in Martial, who is enjoying the best scoring season of his career having reclaimed the number nine jersey.

The France international took his goal tally to 19 with his treble on Wednesday – a man-of-the-match display that saw fellow European hopefuls Sheffield United swatted aside 3-0.

“I think that he’s now at a good age, that he has more experience.

“He played on a high level already for many years, so I’m sure that the time in front of us he will show his capacity.

“I’m very happy for him that he scored three goals. It’s not easy to score three goals in any league, especially the Premier League.

“I am more than sure that this is only the first one for him.”

Victory bolstered United’s top-four hopes and took their impressive unbeaten run to 13 matches in all competitions.

Marcus Rashford’s return from injury during the coronavirus suspension has offered a further boost to Solskjaer’s side, so too the belated availability of Paul Pogba.

The midfielder has endured an injury-hit campaign but showed signs of promise on his first start since September, which also saw him line up from the start alongside exciting January signing Bruno Fernandes for the first time.

“I think that for good players there’s always a space in the team,” Matic said.

“They have quality like every player in our squad so they have to do the best for the team together when they are on the pitch of course.

“I am happy to see them playing and for sure as time is going they will be better and better.”

Matic was proud of the overall team display against the Blades, with United impressing in their first-ever competitive match behind closed doors at Old Trafford.

“I saw many pictures of our fans,” the Serbian said of the 40,000 supporters pictured on the stadium wrap.

“Of course it’s not the same. We always like to play in front of our supporters. They push us always, we always need to give more for them.

“But the situation is like that, we had to adapt and to give our best without them and hopefully soon we will play in front of them.”

Having shone since promotion, a frustrating goalless draw at Aston Villa has been compounded by back-to-back 3-0 losses at Newcastle and Manchester United since play resumed.

“At the moment, we’ve got some really good players who are nowhere near it,” Wilder said.

“I’ll be a part of that as well because I have the ability to change and effect it. I have to take that criticism on the chin which I will do.”