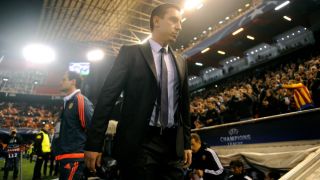 The former Manchester United captain has yet to secure a win in La Liga since taking charge at Mestalla last month and faces the daunting task of hosting Rafael Benitez's Real Madrid on Sunday.

Neville acknowledged the language barrier has made dressing-room discussions difficult during his tenure, as the necessity of a translator means he cannot inspire the reaction he wants from his players.

"The most frustrating thing, without a shadow of a doubt, is having to communicate through a translator," he told Sky Sports.

"The [pre-match] team talk is well prepared, so it's fine, but half-time is frustrating. You want people to react off you and it can't happen.

"I'm trying to make sure I speak to every player equally and not just more to the ones who speak English."

Neville was only named head coach by club majority shareholder Peter Lim until the end of the season but he has denied that a short-term deal makes his position more precarious than other coaches.

"It is uncertain, but it would be if I were given a five-year contract," he said. "I'm quite relaxed about it. It's a club that's had 15 managers in 14 years, they've had turmoil after turmoil with managers.

"A six-month contract doesn't mean you're out of a job in six months. The fact that I know the owners, I can have an honest conversation with them is a good thing.

"That's what made it attractive: it's a big club, but I know the owners. Even though it's a risk, I think it'd be a bigger risk not doing it, looking back and thinking did I miss the chance to go and coach in this league."