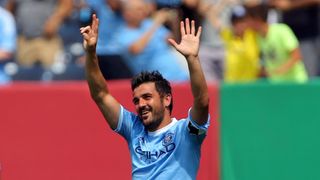 Jack Harrison scored once and set up David Villa's goal to help New York City to a 2-0 MLS win over New York Red Bulls at the Yankee Stadium on Sunday as they went top of the Eastern Conference.

NYCFC were gunning for revenge after losing 7-0 the last time both sides locked horns in May and they got the victory they were after following a sublime performance from Harrison, taking City to  with 27 points from 18 games.

The former Manchester United youngster opened the scoring in the eighth minute after Andrea Pirlo's corner, lifting the ball over an opponent before volleying home from 15 yards out, with goalkeeper Luis Robles failing to keep his powerful attempt out.

Red Bulls took over the initiative as they went in search of an equaliser and Sal Zizzo and Alex Muyl both came close to levelling the scoring.

Villa, meanwhile, threatened on a number of occasions for the home side, but was unable to add a second before the interval.

The ex-Barcelona star did get his 12th goal of the season after the break, though, beating Robles from close range in the 66th minute after a pinpoint cross from Harrison from the right.

Red Bulls were then reduced to 10 men when Chris Duvall was shown a straight red card following a reckless tackle on Pirlo with 10 minutes left on the clock.

Jefferson Mena should perhaps have rubbed even more salt in the visitors' wounds late on, only to aim too high after a quick break as it remained 2-0 for NYC.