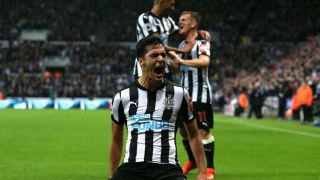 Fresh from a long-awaited maiden victory of the campaign against champions Chelsea last weekend, Roy Hodgson's visitors had been the most threatening side in a game desperately lacking in quality and goal-mouth action on Saturday.

Wilfried Zaha was the Eagles' most lively attacking outlet and should have scored after 40 minutes, instead heading wide from Andros Townsend's cross.

The first half's biggest talking point was a thundering challenge from Yohan Cabaye on DeAndre Yedlin, which could easily have seen the Frenchman receive his marching orders. Referee Stuart Attwell, however, deemed it worthy of only a caution.

Rafael Benitez's side offered nothing in an attacking sense for much of the contest, with Mohamed Diame and Jonjo Shelvey's shots from distance among their only chances of note.

But a late flurry of pressure saw Merino climb highest to head past Julian Speroni from a corner, his first Newcastle goal earning three much-needed points for the promoted side.

The result ends Newcastle's winless of three games, while Palace remain rooted to the bottom of the Premier League table with just three points from nine games.