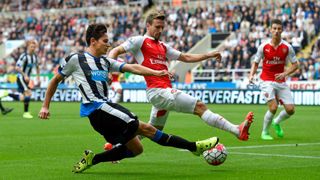 Newcastle United have confirmed Florian Thauvin has left the club to return to Marseille on loan until the end of the season.

The former France Under-21 international joined Newcastle from Marseille at the start of the season, but failed to make an impact at St James' Park and has now returned to the Ligue 1 side.

"Newcastle United winger Florian Thauvin has returned to Marseille on loan until the end of the season," a statement on the official Newcastle website reads.

"The 23-year-old arrived on Tyneside from the French club last August, but has headed back to the Stade Velodrome for the remainder of the 2015-16 campaign.

"There is no option for purchase within the deal, so Thauvin will return to Newcastle at the end of the loan.

"Thauvin has made 16 appearances for Newcastle to date, five of which were starts, and has scored one goal."