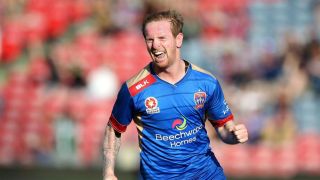 Jets had not won in nine matches going into the visit of a Wellington side who had taken just two points from their previous five outings.

But the hosts led courtesy of Milos Trifunovic seven minutes in as the Serbian striker opened the scoring from the spot having been dragged down in the area.

It was the Jets' first goal since the 1-1 draw with Brisbane Roar in November and Ryan Kitto doubled that lead inside half an hour when he pounced on a rebound after Glen Moss had saved David Carney's shot.

Phoenix remained flat and struggled for ideas despite Kantarovski's second yellow card 13 minutes into the second half for a dangerous challenge on Vince Lia.

Despite being a man down, Carney extended Jets' advantage when he latched onto Enver Alidovic's through-ball to finish soon after, with Matthew Ridenton's late consolation mattering little as the home side joined their opponents on 16 points - four off the top six.