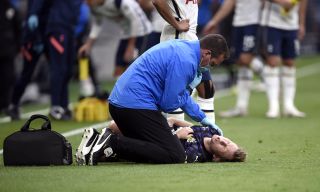 Newcastle midfielder Matt Ritchie is facing up to months on the sidelines as he prepares to undergo surgery on a dislocated shoulder.

Ritchie, 31, was hurt during the second half of Sunday’s 1-1 Premier League draw at Tottenham, and tests have revealed the damage is similar to that suffered by defender Fabian Schar against the same opponents in July, an injury which has kept him out ever since.

Bruce said: “He will probably have an operation today – I know he’s seeing the surgeon today – or certainly in the next 24, 48 hours.

“It’s a very similar injury to Fab Schar, disruption of the joint, so how unfortunate are we? To have one is bad enough, but to have two in a matter of weeks is incredible.

“It looks as if he’ll need an operation and it will be performed very shortly.”

Given Schar’s lengthy recovery period – he is back in training after nine weeks – Ritchie is likely to sit out a significant number of games.

Asked how long he could be missing, Bruce added: “Fabian is ahead of schedule and he’s doing well, but obviously we’ve just got to be a bit careful.

“The kid wants to join in and play, but we’re obviously governed by doctors on that and we’ll see how he is. But yes, we’re looking at a lengthy lay-off.

“We know how valuable he is around the training ground and what he is. He’s got that little bit of leadership about him and with any good player, it’s a miss.”

News of Ritchie’s misfortune was confirmed on the eve of the Magpies’ Carabao Cup fourth-round trip to League Two Newport.

Bruce is again likely to field a much-changed side having done so against Blackburn in the second round and at Morecambe, where his under-studies romped to a 7-0 win, in the last.

However, he is expecting a sterner test this time around with the Welshmen having beaten Leicester and drawn with Premier League counterparts Tottenham and embarrassed Sky Bet Championship sides Leeds, Middlesbrough, Swansea and Watford in the domestic cup competitions in recent seasons.

Bruce said: “Over the last few years, they have been the team in the lower divisions who have produced the shock, whether it’s in the FA Cup or the Carabao Cup.

“I’ve watched their performance at the weekend and the one before when they beat Watford – they’re a good side.”