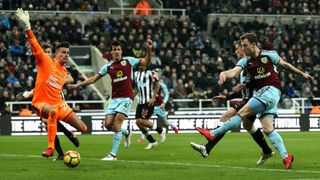 Sam Vokes came off the bench and forced a header in off an unfortunate Karl Darlow in the 85th minute to seal a share of the points, ending the visitors' four-game losing streak across all competitions.

Desperate to end a horror home run that has plagued them since October, Newcastle seemed on course for a pressure-relieving victory when Jamaal Lascelles broke the deadlock midway through the second half.

Joselu, who looks set to face competition from impending arrival Islam Slimani, had failed to convert a first-half penalty.

But it hardly seemed to matter when skipper Lascelles nodded in his second of the campaign from a corner supplied by impressive debutant Kenedy, who is on loan from Chelsea.

That was until Vokes' header came back off the crossbar and bounced in off Darlow, leaving Newcastle with only a third point from a possible 24 since their last home victory, as Burnley edge up to seventh place.