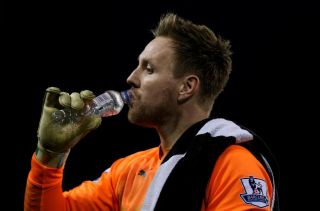 Elliot had been deputising for regular number one Tim Krul who is expected to be out until the new year with an ankle injury.

However, the 28-year-old suffered injury woe of his own during Newcastle's impressive 2-1 Premier League victory over leaders Chelsea at St James' Park last weekend.

Manager Pardew has now revealed that Elliot is set for a spell on the sidelines with a thigh complaint, meaning third-choice Jak Alnwick will continue between the posts.

"Rob Elliot will be out for six or seven games," Pardew said ahead of Newcastle's trip to Arsenal on Saturday.

"Jak Alnwick will start in goal at Arsenal and we wish him well."

Elliot will also be unavailable for Wednesday's League Cup quarter-final at Tottenham and the derby encounter with Sunderland on December 21.

Newcastle then face Manchester United, Everton and Burnley in the space of seven days during a busy Christmas schedule in the Premier League.