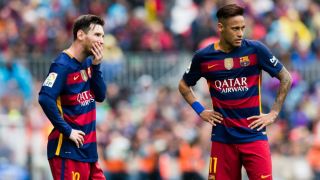 Barcelona attacker Neymar says world football would not be the same without his team-mate Lionel Messi.

Messi won the Ballon d'Or in 2015, but has had a turbulent time over the last month, a spell which started when he retired from international football after Argentina's failure to win the Copa America.

Messi was then convicted of tax fraud, which led to him being fined and sentenced to a 21-month jail term, which he is appealing to the Spanish Supreme Court despite being unlikely to serve any time in prison.

That is because any sentence of less than two years – for non-violent offences – can be served under probation, according to Spanish law.

Asked about Messi's sentence, Neymar said: "Messi is not only my friend, he is also my idol, and I will always support him. I can imagine what he is going through."

Speaking at a publicity event at the Neymar Institute in Praia Grande, the 24-year-old – who has signed a new five-year contract with Barcelona - was also asked about Messi's decision to quit the international game.

Neymar said: "I respect his decisions, but football without Messi isn't football, it's hard to imagine it without him.

"If you like football at all, then you can't help but admire Messi and everything he's achieved for Argentina and Barcelona."

Neymar was heavily linked with a move to Paris Saint-Germain prior to signing his new deal at Camp Nou and the Brazil international confirmed there had been interest from other clubs.

He added: "I am very happy. It is true that there were various proposals, but my wish has always been to stay."

Neymar will join up with the Brazil squad next week to begin preparation for the Olympic Games, which take place on home soil from August 4.