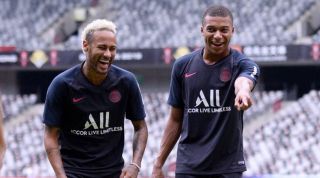 The La Liga champions were unsuccessful in their efforts to re-sign the Brazilian this summer, two years after his world record €222 million move to PSG.

Barcelona star Lionel Messi this week spoke of his regret at the club’s failure to secure a deal and Mundo Deportivo claims that the transfer saga has caused internal tensions at the Camp Nou.

With that in mind, the outlet claims that the Barça hierarchy are now debating whether to persist in their efforts to bring Neymar back or turn to Mbappe instead.

A move for the 20-year-old, who has a contract with the Ligue 1 giants until June 2022, would be even more difficult to achieve than one for Neymar.

That hasn’t put off influential figures inside the Catalan club, though, as they believe Mbappe possesses as much ability and can score more goals, as well as being seven years younger.

The club are also aware that Mbappe would be a less divisive signing, as there are sections of the fan base who are yet to forgive Neymar for the manner of his 2017 exit.