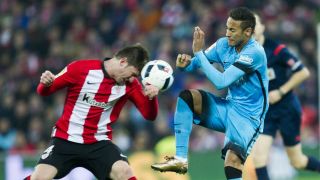 Neymar added to Munir El Haddadi's opener midway through the first half but came in for rough treatment from Ernesto Valverde's side, who Barca beat 2-1 following Aritz Aduriz's late strike.

The Brazil captain was accused of showboating in the two team's Copa del Rey final clash last season and he drew Bilbao's ire once again on Wednesday.

After having the ball flicked over his head by Neymar in the second half, Aduriz scythed him down before stepping over the fallen Barca forward and dragging his foot across his back.

The incident went unnoticed by the officials, but the 23-year-old labelled the referee's display as "normal".

"When the match ends, everything is left on the pitch. At times they played hard and at others they did not," said Neymar.

"The referee is there to see it. I think the refereeing has been normal."

"That goal may complicate the tie, but we had a great game and now we have to win the return leg," he added.

"But the goal is dangerous because they are a good team with players who can be decisive. We must be vigilant."